I wore this really pretty dress -- black satin with red and yellow and cream flowery things -- that I got at Loehmann's for just $29.99 (marked down from $179!). It was strapless, though, which just does NOT work with my me -- strapless bras hold my rack in place, yes, but in a very bad place, like just above my bellybutton -- actually lower than they sit in nature (swear!). So I sewed in some fancy red and black silk ribbon straps, which performed the double-duty of hiding the straps of the BRAbra that held up my stuff AND "pulling in" the red of the stripes on my red-and-cream towering Fornarina ankle-strap shoes, which I was bent on wearing since I've managed to put them into action only once since I bought them in January. 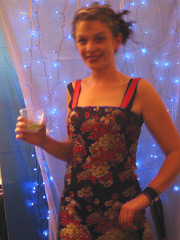 Here you can semi-see the ribbon straps I added (notice how they're bowing and gapping ... I'm not the most patient of sewers, maybe).
There was some left-over ribbon, and at the last minute I turned it into these weird, dangly bracelet things, just looped them around my wrist and (Adrienne) pinned them into place using these random two-dollar letter pins from the Gap, an "f" and a "c" (Fucking Cute? Fine Cougar? For sCoring?), and let the excess ribbon dangle down. They made dipping into the salsa careful work, but looked very cutting-edge/confusing.

And here is a slightly brightened view of the quadrant featuring the freakishly high-fashion ribbon bracelets. (I wore them just for you. And you. Hi.)

(PS: My diary has officially moved over to my official evany.com website. Let's meet up over there!)

(PS: My diary has officially moved over to my official evany.com website. Let's meet up over there!)